The low pressure Otto cycle differs from the high pressure in particular with regards to the fuel injection timing. Several concepts are possible.

Dual Fuel engines have been developed to allow engines to operate on gas as an alternative to oil. During operation on oil the engine runs as a normal diesel engine. During operation on gas the engine instead use the Otto cycle. Gas is injected through a gas injector, normally located in the cylinder head upstream from the inlet valves, and thus mixed with air in the cylinder and inlet channel. At TDC a burst of pilot diesel initiate the combustion.

Instead of a gas valve, a methanol injector could be used. Both high pressure valves that atomises the fuel and vaporised methanol have been suggested.

Dual fuel engines normally operate on lean mixtures in gas mode as the pilot fuel is sufficient to ensure combustion. This allows for higher compression ratio and thus higher efficiency.

On medium and high load throttling is usually not necessary; Wärtsilä uses a waste gate in the turbine to lower the charge air pressure during medium load to improve the fuel/air ratio but a throttle might be necessary at low load. 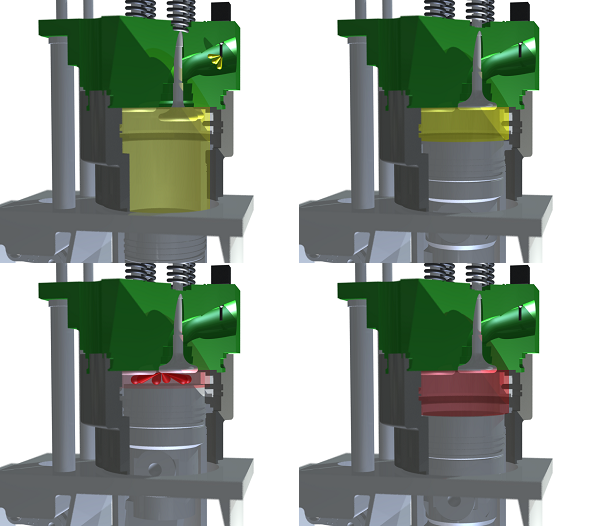 Figure 9: Premixed Otto combustion: 1) Methanol is mixed with air during the intake period. 2) The air-methanol mixture is compressed in the cylinder. 3) A pilot injection of diesel starts the combustion at TDC.

Figure 9: Premixed Otto combustion: 1) Methanol is mixed with air during the intake period. 2) The air-methanol mixture is compressed in the cylinder. 3) A pilot injection of diesel starts the combustion at TDC.

As with direct injection knocking is a concern, for a retrofit the compression ratio would likely need to be lowered by enlarging the bore. Material incompatibilities concerns and emission levels are similar to other Otto concepts.