The ME-LGI (liquid gas injection) two stroke engine from MAN Diesel & Turbo is capable of dual fuel operation according to the diesel cycle. The engine is based on the proven ME-GI (gas injection) concept that has been developed since the early 90’s and is in use on both sea and land. When operating on gas or methanol a burst of pilot diesel is used to initiate the combustion. The cylinder head is fitted with two fuel oil valves and two gas valves that can be exchanged for valves suited for methanol. A common rail system is used to supply gas and oil controlled valves is used to control the injection timing. Similar to the high compression diesel the risk of methanol contamination is very low as the fuel is injected to the ongoing combustion. The arrangement provides full flexibility to shift seamlessly between different fuels with no loss of performance. For prolonged operation on diesel fuel it is recommended to exchange the special fuel injectors for regular ones to increase fuel efficiency. 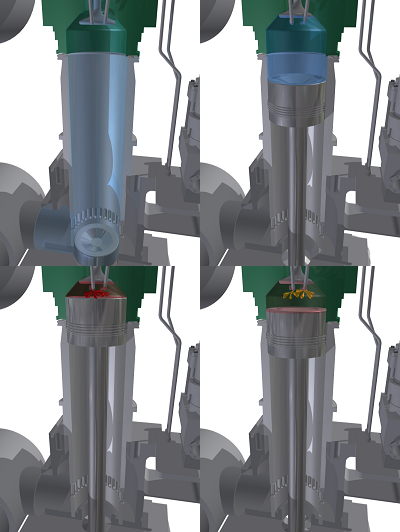 Figure 6: Diesel cycle combustion in a 2-stroke engine: 1) Scavenging, air inlet in bottom of cylinder is open and exhausts are vented through the open top valve. The ME-GI concept for methanol will be used in six announced methanol tanker newbuildings that will be on charter by Waterfront Shipping, a subsidiary of Methanex, one of the largest methanol suppliers.