Emissions from combusted methanol is overall better compared with conventional fuel oils. The comparison can be seen from different perspectives regarding, the different sources and production method, from a life cycle perspective and other parameters. Following paragraphs will give an overview of the benefits of methanol.

One important benefit with methanol as a marine fuel is the absence of sulphur-oxides (Sox), a highly regulated emission-parameter from IMO and EU. Vessels operating on methanol do automatically fulfil IMO:s SECA (Sulphur Emission Controlled Areas) regulations, where the allowed sulphur content is set to 0.1%. This regulation limits the origin of sulphur acids when the sulphur is mixed in the air and water, which creates acid rain that causes deforestation, acid oceans and lakes that affect the marine life.

Particulate matter (PM) is a mixture of solid particles and liquids mixed in the air. Where the PM has a size of less than 10 micrometers in diameter. The marine industry is often associated with soot and smoke, this is an example of PM, which occurs when for instance oil is combusted. If the conventional fuel oil is switched to methanol the problem with PM is eliminated. PM and SOx emissions is linked, where IMO regulates emissions of both mentioned under MARPOL ANNEX VI Regulation 14. Exposure to PM can affect both your lungs and your heart. Numerous scientific studies have linked particle pollution exposure to a variety of problems, for instance premature death due to heart and lung diseases. A local environmental problem is the appearance of haze where fine particles reduces the visibility, a common problem in large cities.

The Nitrogen Oxides (NOx) production is lowered when methanol is combusted compared with conventional fuels. The NOx-reduction is dependent on the combustion type and the combustion temperature. By running a marine engine on methanol with a complementary SCR (Selective Catalytic Reduction) unit, the NOx production can be drastically decreased. IMO:s regulations of NOx is regulated in MARPOL ANNEX VI Regulation 13, with TIER I, II and III. The allowed NOx emission is based on the ship construction date and the main engines RPM (Revolution Per Minute). NOx contributes to photochemical smog which is a problem all over the world large cities. At the same time NOx is an acidic and highly corrosive gas. This increases the acidification and over-fertilisation on land and in water. It is also toxic for the human respiratory passage, leading to irritation and after long time exposure, chronic lung diseases.

Carbon dioxide (CO2) is a naturally occurring greenhouse gas. The gas keeps the Earth warm by absorbing the sun's energy and by redirecting energy back to the Earth's surface. An increase in the amount of carbon dioxide creates an overabundance of greenhouse gases that trap additional heat. This trapped heat leads to melting ice caps and rising ocean levels, which cause flooding.

Regarding the shipping industry, there is potential to reduce the amount of CO2 by choosing methanol as fuel. Comparing methanol, LNG (Liquified Natural Gas) and MDO (Marine Diesel Oil) from a wake to well perspective, the CO2 emissions is comparable, since the three fuel types are fossil. While comparing bio-methanol extracted from farmed or waste wood instead, the CO2 emissions is close to zero. Since the Tank-To-Wake emissions is eliminated and only the Well-To-Tank will contribute to CO2 emissions. This is an additional benefit of marine methanol.

Through electrolysis, a procedure to create methanol, using Hydrogen gas (H2) and CO2 it is possible to be more than CO2 neutral, it reduces the amount of CO2 in the atmosphere. Though the technology is not functioning on a large scale yet, but it has potential.

Pictures of oil spills in the ocean where animals are soaked in heavy fuel oil is well-known and a big problem for all marine life. This problem is limited if methanol is used as a marine fuel. If methanol enters any sea or lake, it will dilute and is therefore less harmful to marine life compared with conventional fuel oils.

Comparing the Lethal Concentration where 50% of a fish population would die to exposure of a mix of water and different fuels, methanol is around 15 400 mg/l. For diesel the concentration is 65 mg/l (a factor of 240) for diesel and 8.2 mg/l (a factor of 1900) for gasoline, showing another benefit of methanol. 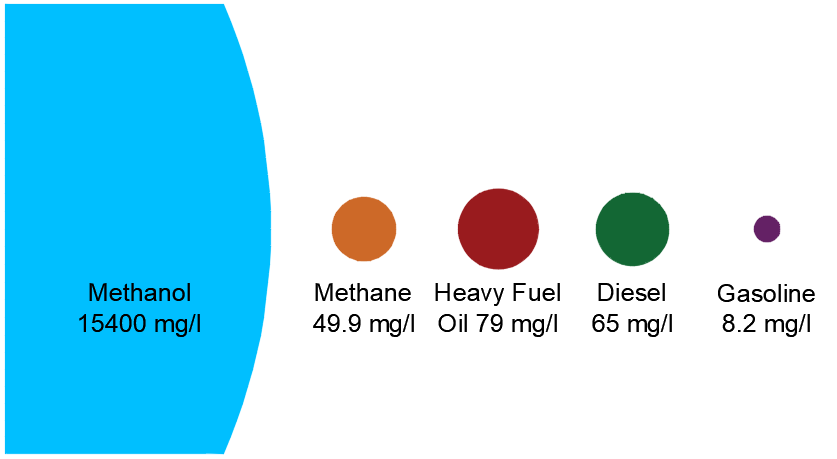