In addition to operate the engine according to either the diesel or the Otto principle, the possibility to use both is possible. This can be done in a lot of different ways. Broadly either by using different methods during different running conditions by using both to a larger or smaller extent at the same time.

A suggested method to get both the benefit of low NOX emissions and good load response and high efficiency is to run the engine according to the Otto principle at low load and according to the diesel cycle at high load. Both modes rely on an injection of pilot diesel to initiate the combustion.

At low load the engine operates according to the premixed Otto cycle with pilot diesel to start combustion at TDC.

At high load the injection of methanol is delayed so that it occurs after the pilot fuel and thereby switching from Otto to Diesel mode.

This allows for low NOX formation at low load combine with avoidance of knocking problems at high load. As there is no need to lower the compression ratio the efficiency should over all be better and it is still possible to operate the engine on diesel fuel as backup with no loss of performance in relation to a standard engine.

One method to do this is a concept called Homogeneous Charge Compression Ignition (HCCI). Like an Otto engine fuel and air is mixed inside the cylinder during compression, the difference is that HCCI like a diesel engine relies on spontaneous combustion of the mix due to the higher temperature caused by compression. As combustion simultaneously starts at several locations in the cylinder combustion is nearly instantaneous. The concept has shown good results with regard to efficiency and NOX and soot emissions, although hydrocarbon emissions have shown to be somewhat higher than the normal Otto engine. The difficult part is to control the ignition, this is easy in a normal Otto engine by controlling the spark plug or in a diesel engine by injecting fuel but as HCCI relies on spontaneous combustion of a premixed fuel it becomes much harder. By better understanding of the combustion process in combination with advanced engine control units it is possible to achieve results by varying parameters like fuel temperature, cylinder pressure and air quality.

The air quality is controlled by Exhaust Gas Recycling (EGR). By using EGR the oxygen content is lowered and as a result the combustion temperature. This lowers NOX formation but side effects are more soot and lower efficiency.

One particular adoption of HCCI is called Partial Premixed Combustion (PPC) and is the focus of research by Bengt Johansson at LTH in Lund. To achieve better control of the combustion and at the same time high efficiency and low emissions the HCCI concept in combination of direct injection close to TDC is used.

1. About 60 % of the fuel at -60° TDC to create homogeneous mixture
2. Rest of fuel about TDC to initiate combustion


Depending on parameters such as fuel type, compression ratio and amount of EGR the combustion might progress quite differently. An example of how cylinder pressure and rate of heat release relate to crank angle is shown in Figure 12. 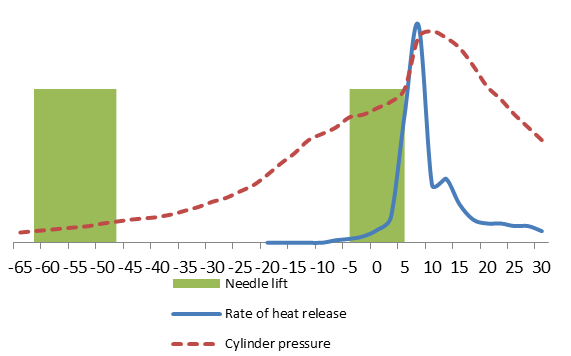 Figure 12: An example of average cylinder pressure and rate of heat release to crank angle (0 is TDC) during a PPC experiment using gasoline as fuel. The figure shows how fuel is injected in two bursts at different crank angles.

Studies at LTH have showed good potential for the use of low cetane fuel such as gasoline, the longer ignition delay compared to diesel fuel lowers the risk of violent combustion and allows for higher compression ratio and less use of EGR that lowers the combustion efficiency.

To control the combustion and to achieve high efficiency over a wide power band is still a challenge. PPC as well as other HCCI concepts is still in the research phase and is not ready for large scale implementation but could prove to be a feasible development path towards more efficient internal combustion engines. Experiments have been performed with ethanol that have showed potential in the PPC process and it is reasonable to believe that methanol could also work well.